These Magyars are nice and prominent people;
Their clothes are made of brocade, their weapons are of silver ...
(Abu-Said Abu-al-Khaya Zohak Gardisi)
A more detailed DNA test of the Y-chromosome of the Saetgarievs [1] indicated the belonging of his clan to the N-M2783 line. While the Baltic-Finnish snp Z17078 at the Saetgarievs in the minuse. The haplotype and snps of Saetgariev, in my opinion, point to the East-Finnish (Volga) origin and common roots of his clan with Bashkirian Yurmi and Hungarian tribe Ker.
Other researchers [2], according to the DNA test, think that the Saitgariev haplotype are the South Baltic origin, referring to the supposedly ancient migration of Balts to the Volga region.
There are no Tatar N-M2783+ among matches to Saetgariev.  But have the Hungarians from the N-M2783+ of the Czech Republic much more related than Tatars from the same subclass, and the time of the life's common ancestor  Saetgariev clan with the Hungarians about 1,200 years ago. Even if we assume that the Saitgarievs are directly related to the late migration of Finns from the Baltic to the Volga region, then the Balto-Finns in the Volga region were to take part in the ancient Hungarian confederation of tribes, because the M2783 line is present have among the Hungarians. Proceeding from the fact that the ancestors of the Finns moved to Europe from the Urals, it is more logical to assume that the line M2783 is connected initially with the eastern (Volga) Finns, and some of the descendants of this line reached the Baltic from the Volga and the Urals, and not vice versa. 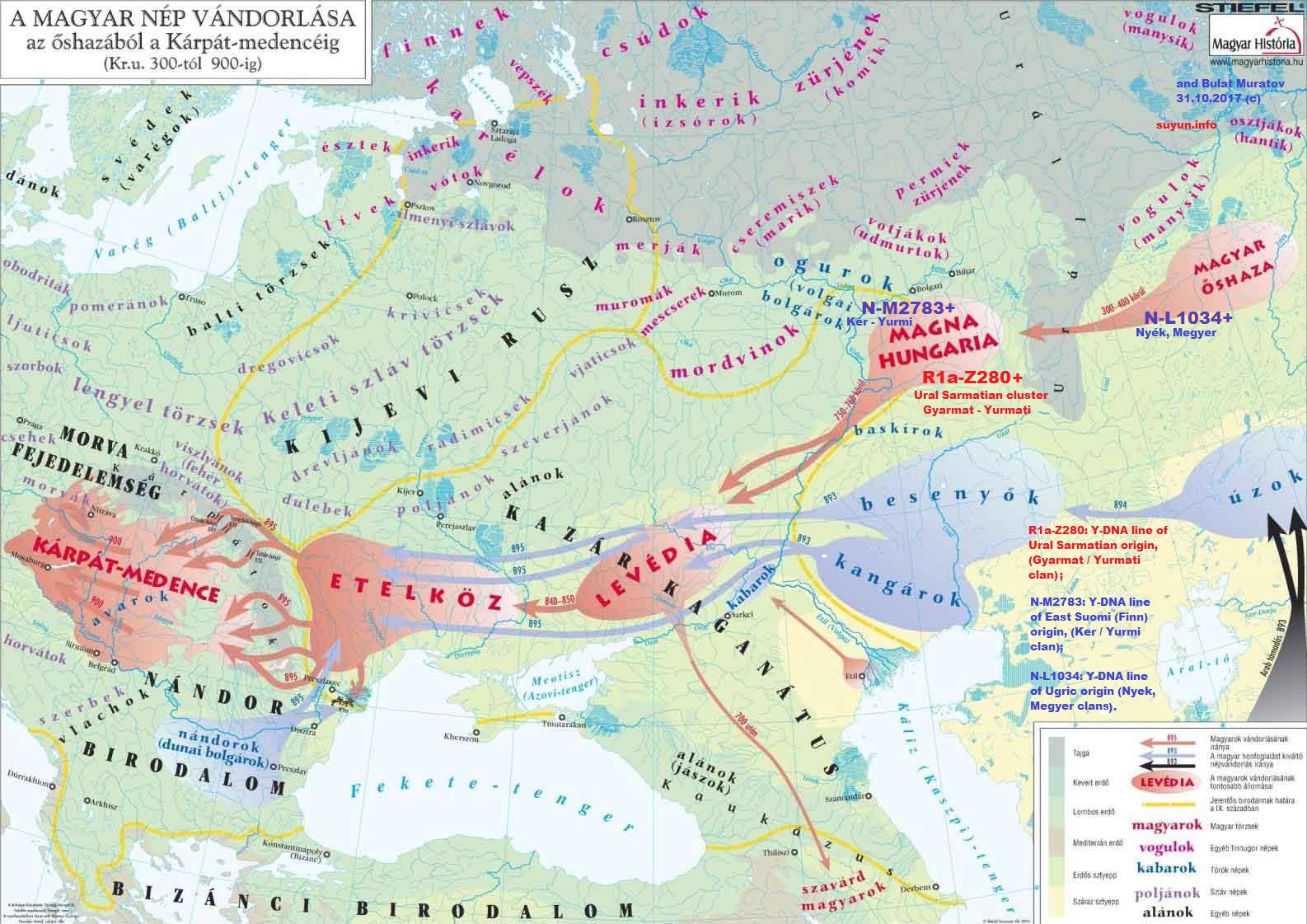 Yurmi by origin is a Finnish clan [10a], and not Ugric tribe in the composition of the Magyars of the Urals. The eastern-Finnish origin of yurmi is indicated by ethnic parallels with the Danube Bulgarians - the clan Ermi [10b], and the anthroponym Yurmekey in the tribal structure of the Chuvash [11]. In the ethnogenesis of the Chuvashes, the Finnish tribes of the Volga region also took part. The ethnonym Yūrma [12] itself is associated with the resettlement of the Finns from the Urals and now occurs from the Urals to Finland, for example, the toponym of Jūrmala in the Baltic.
The version that the clan of the Saetgarievs is closely interrelated with the Bashkirian Yurmi relies in particular on such facts: a) that the tribal line of the Saetgarievs have name Teptar, and Teptar clan are part of the Bashkirian Yurmi; b) the territory of the settlement of the Yurmi clan also in the Tuymazinsky District of Bashkortostan [19], from where the ancestors of the Saetgarievs themselves. But in the Tuymazinsky district of Bashkortostan there live also Bashkirs-Eney [20], whose roots are also interconnected with the Hungarians of the Danube.